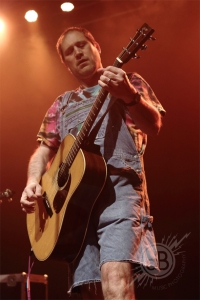 Hayseed Dixie made a welcome return to Glasgow with a storming show at the O2 ABC last Friday night.

It’s hard to believe that Hayseed Dixie have been recording their unique blend of rock and bluegrass music for 15 years. I can still remember the first time I heard their version of Ace of Spades on our office radio and it is probably the only time any song has caused me to stop what I was doing and listen in opened-mouth amazement. 14 albums and over a thousand gigs down the road and they are still pushing the boundaries of what’s possible with a bunch of acoustic instruments, a whole lot of imagination and a bucket-load of talent. And booze. Mustn’t forget the booze…

The show itself was everything you’d hope a Hayseed Dixie gig would be. From the moment they walked on stage to set up their 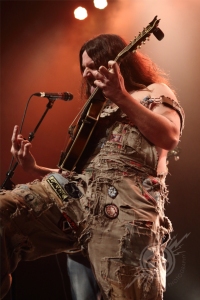 own instruments until they walked off after a fabulous 15 minute encore to go drink with the audience, John and the boys treated the packed 1,300 fans to a mixture of old and new material, covers and original work. Since the band are touring their new album Hair Down To My Grass, a number of songs from that release featured and included fantastic Rockgrass versions of Journey’s Don’t Stop Believing, Survivor’s Eye of the Tiger, Europe’s The Final Countdown, Twisted Sister’s We’re Not Gonna Take It and Def Leppard’s Pour Some Sugar on Me.

Older favourites like Fat Bottomed Girls, Walk This Way, Paranoid, I’m Keeping Your Poop in a Jar, Corn Liquor and of course Ace of Spades were all present and correct, but the highlight for me was unquestionably Queen’s Bohemian Rhapsody. I’ve heard their version of this song many times before, but this one was better. Much better! Right at the very end of the song, just as you expected the words ‘anyway the wind blows’, the band eased into Marvin Gaye’s Let’s Get It On. Then at the end of that song, they switched effortlessly back into Bohemian Rhapsody to finish. Sounds weird I know, but it works brilliantly! 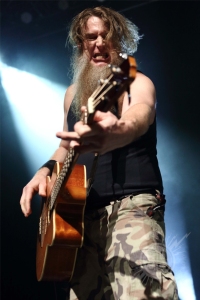 Throughout the evening, each member of the band had their chance to shine. Perhaps most impressively demonstrated during Duelling Banjos when John Wheeler went toe-to-toe with Johnny Butten before the others joined in for a thunderous finale to the song. Hippy Joe Hymas, who like Johnny Butten, joined the band a couple of years ago is an absolute star – he’s like Angus Young with dungarees a mandolin and too much energy. Jake Bakesnake Byres drove the band on with an awesome performance on his acoustic bass. His favourite ‘Killin’ Song’ is Bohemian Rhapsody. Just so you know…

Like all good frontmen, John Wheeler can work an audience effortlessly and had the entire auditorium in the palm of his hand throughout the show. As Scots, we generally don’t need to be asked twice if we’d like a drink, so every time John raised a glass – which was often – and asked the audience ‘are you still drinkin’ with me?’ it should come as no surprise that he got a very 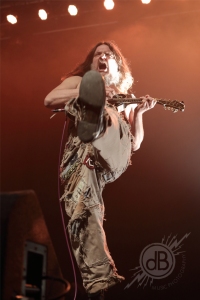 So to that encore…

This took the form of a musical experiment and is by John’s own admission something that could work, or might not. Basically, this involved taking verses of one song and and the chorus of another song and mixing them together. So, first up was Hotel California. With the chorus of Careless Whisper. Another weird sounding combination which, weirdly, worked! Following on from that was an eclectic mix of songs from the likes of Britney Spears, the Bangles, and Abba. All delivered in 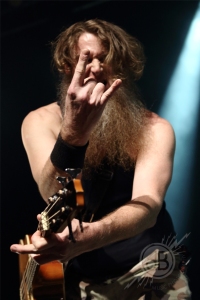 Hayseed Dixie’s legendary Rockgrass style. Honestly, it’s one of these things that you have to go and see for yourself! And if any of you are going to the band’s forthcoming gigs, this part of the show is sure to have evolved further by the time you see it.

Unfortunately all good things have to come to an end, and they did that in some considerable style, with a fantastic Rockgrass version of Pink Floyd’s Comfortably Numb.

I know the music industry is a serious business, and every successful band and artist, including Hayseed Dixie, takes business very seriously. However, that doesn’t mean it can’t be fun. And I can’t think of any band that does fun better than Hayseed Dixie. Along with the 1,300 others in the audience, I left the venue with a big smile on my face having had a fantastic evening, and wanting more.