GUN Live at the Barrowlands

You’d be hard pushed to find an online review of GUN’s previous gig at the Barrowlands. That’s primarily because they last played there an astonishing 18 years ago. And that’s a lot of years BC (Before Cackblabbath) when the interweb was a much smaller, less interesting place to visit.

The current tour coincides with the release of GUN’s latest studio album, Frantic, and is the first opportunity for fans to see how this new material sits alongside their well loved older songs in a live setting. And what a setting! I know Glasgow now has a world class concert venue in the shape of the Hydro, but it just can’t touch the Barrowlands for atmosphere. And this without a doubt i

By the time Dante Gizzi (vocals), Jools Gizzi (guitar) Johnny McGlynn (guitar) Paul McManus (drums) and Andy Carr (bass) took the stage, the place was packed somewhere close to it’s 2100 capacity. And we didn’t have to wait long for a song from the new album because first up was Let it Shine. You immediately notice that GUN have moved in a slightly different direction with their new material, employing synths and strings in whats more a pop-rock vibe than outright rocker. I know some people might think why change? There wasn’t much wrong with 2012’s Break the Silence after all. However, the likes of Let it Shine, One Wrong Turn, Hold Your Head Up and title track Frantic are all instantly likeable, catchy, radio friendly songs which are different from GUN’s previous work, but in a good way. And lets face it, if they didn’t try something new, someone somewhere would undoubtably complain that they’re just rehashing the same old stuff time and again. 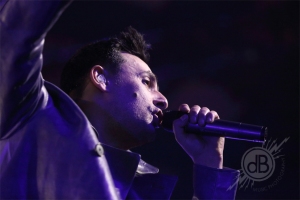 As good as the new tracks are, there are a handful of songs which every single fan in the room wanted and expected to hear. As many of you may know, the Barrowlands floor is famously springy – and it got a helluva pounding when Jools hammered out the opening chords to Word Up. It’s one of those signature songs that I think every band wishes they had in their armoury – the place just went nuts! This, plus other oldies such as Don’t Say it’s Over, Welcome to the Real World, Taking on the World and the awesome Steal your Fire showed GUN at their best. And showed that they can still rock with the very best. 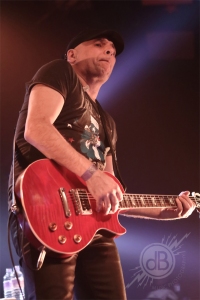 reception they received throughout the evening. Obviously a lot of blood sweat and tears have been shed in reaching this stage since reforming in 2008, and I’m guessing the band enjoyed their hometown show in this iconic venue every bit as much as the audience. Hopefully there will be many more to follow.

← The Quireboys Live at Bannermans
James Brown is Annie →