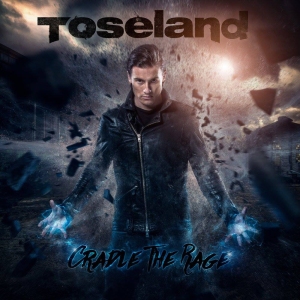 Life after a successful career in Word Superbikes and MotoGP might at first glance seem to be a bit of an anticlimactic proposition. Not if you’re Jamie Toseland however, who seems to have swapped the racetrack for rock ‘n’ roll like the proverbial Duck taking to it’s favourite stretch of watery stuff.

March 11 sees the global release of Toseland‘s second album Cradle The Rage, and having listened it to a few times I’ll cut to the chase right now: decibelROGUE loves it! Sure, having the likes of Toby Jepson onboard as producer and  the legendary Mike Fraser on mixing duties helps enormously in getting the finished album to sound as good as it does. But at the end of the day you can only polish a turd so much. These guys are working with some really good source material in the first place.

Cradle The Rage is packed with properly good no-nonsense rock music. Given that Toby Jepson’s at the production helm, it’s no surprise there are a couple of tracks, such as opener ‘Too Close To Call’ which sound like they have more than a little Little Angels DNA running through them. The album wastes no time in kicking into top gear with the next two tracks ‘Puppet On A Chain’ and ‘Living In A Moment’. Both songs are stick-on certainties to blow the roof off many a live venue in the coming months. The rest of the album continues in a similar vein with lots of great hooks and plenty of huge riffs.

Sometimes you need to listen to a new album a few times to really dial into it, but Cradle The Rage isn’t one of them. This is instantly likeable stuff, and we can’t wait to catch the band at one of their forthcoming shows to see how this new material sounds live.

Speaking of which, Toseland are touring the UK throughout March, so check out the dates below to see if they are heading your way.

Here’s a little taster of what to expect…

Get your tickets HERE

One thought on “Toseland New Album and UK Tour”