One of the great things about running a webzine like decibelROGUE is that every so often I get emails about artists and bands who were massively successful back in my youth, but for whatever reason fell off my music radar years ago. HEART are a classic case in point. Following the release of their hugely successful self-titled album in 1985, they went on to achieve further stratospheric commercial success with Bad Animals and Brigade.  During that five year period they were on top of the music world and a constant fixture in my record collection. But then, in the early nineties, along came a band called Nirvana and my music radar turned in a totally different direction.

So it seems pretty apt that I’m revisiting a band at a time when they themselves have revisited songs from their back catalogue, since seven of the ten tracks on Beautiful Broken are re-recordings. Founding members Nancy and Ann Wilson have always felt that there are songs in their archive that were over-produced when they were originally recorded and which could really benefit from a contemporary reworking. This, they hope, would help bring the songs to a wider audience.

Now, here’s the thing. I’ve got a real soft spot for all that ‘produced to an inch of it’s life’ 80’s mainstream commercial rock music, and would ordinarily advocate leaving well alone – for all its faults. However, having done a direct comparison between some of the re-recorded tracks and their original versions, I have to admit the new versions kick the original versions deep into the weeds. Think I need to let go of the 80’s… 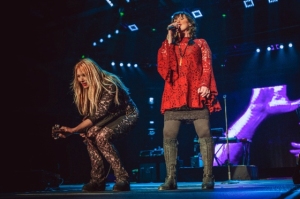 Take Johnny Moon for example. There’s a really cool, laid back Pink Floyd Dark Side of the Moon-era vibe about it. There’s a beautiful simplicity to the song, the lazy groove of Craig Bartock’s guitar and Anne Wilson’s awesome vocals complimenting one another perfectly. Each instrumental element has been woven into the song beautifully and it just screams CLASS. Compare this recording to the original version and sure, there’s still the same laid back vibe, lazy guitar and brilliant vocals. But the atmosphere is completely wrecked after just 21 seconds when out of nowhere comes an overbearing clatter of horrible 80’s electric drums. YUK!

Pick of the new songs and arguably my favourite track on the album is I Jump. Funnily enough, during my first listen, I very nearly hit skip during the first verse, since the song seemed to be slipping into ‘filler track’ territory. However, I’m glad I stuck with it because a few seconds later the song exploded into a hugely dynamic chorus replete with string section and more than a hint of Led-Zep at their bombastic best. God only knows how good this song would sound live with the backing of an orchestra. So anyone who was at HEART’s show at The Royal Opera House where they had the backing of the Royal Philharmonic Orchestra, please don’t feel free to tell me how good it was. Jealousy is not a good thing…

One other pretty interesting highlight of the album is Metallica’s James Hetfield who features on the title track. The song was originally a bonus track on Fanatic, HEART’s last album, but this version is essentially an entirely new song with Hetfield not only providing vocals, but adding lyrics to the original. “It blows the previous version out of the water,” says Nancy. “James just took the song on, and what he added was perfect with a bite and a rock accent.”

So do you have to be an existing fan of HEART to love this album? Of course not. This is an absolutely brilliant collection of songs that anyone with a love of music will enjoy and reflects the fact that HEART have never been afraid to explore different musical genres.  From outright rockers, to R&B songs and yes, there are gentle ballads in there too, there’s something for everyone on the album. Unless of course you’re looking for 80’s era over-produced, over-edited, overdone material, that is…