In recent years I’ve been lucky enough to see the band play to sell-out audiences in larger venues such as The Barrowlands a number of times. Most recently, we covered their performance at the Party at The Palace festival in Linlithgow. But as great as these large-scale shows always are, I’ve always had a hankering to see GUN tear up a smaller, more intimate venue. So when I caught wind of this gig at the 600 capacity La Belle Angele, I jumped at the chance to go along.

There’s been a change to GUN’s lineup since the Frantic tour, with guitarist Alex Dickson rejoining the band.  Alex was part of the band during the Swagger and Gallus era, and as the Edinburgh audience was about to discover, his return is a very good thing indeed.

All it took was the first few minutes of the gig to see that there’s a new dynamism about GUN’s performance. And much of the credit for this can be laid at the feet of Alex Dickson. Energy is not something that their music and live performances have ever lacked, but Alex’s return seems to have given the band added dig and intensity. It also has to be said that when the band performed songs from Gallus and Swagger, they’ve never sounded better. I know it sounds daft to say it, but to my ears at least, Alex has made GUN sound more authentic.

Friday’s setlist contained, as you’d expect, a mixture of all of GUN’s major hits from the nineties and plenty of their more recent material. Such is the strength of the band’s back catalogue, they could afford to play their biggest hit to date, Word Up, right at the beginning of the evening. It certainly got the packed audience warmed up with the first bit of bouncing of the gig! As the night progressed, and as Dante and the guys launched from one song straight into the next, you could feel the show was becoming one of those intense, sweat-soaked rock gigs you only really get at smaller, intimate venues. Just the kind of gig I was hoping for!

Ordinarily about this point I’d pick out a couple of songs as highlights of the evening. This time though, since it was the first time I’d see him play a full headline show with the band, I’d have to say Alex Dickson’s entire performance was the highlight of the evening for me. It goes without saying that his playing was tremendous, but it was the way he bombed around the stage all evening which really caught the eye. His was a swaggeringly good, high-octane rock guitar performance.

Dante revealed during the show that they are working on a new album which should be ready for release sometime in the spring. Although they didn’t give us a sneak preview of any new material, Dante did say that with Alex back on board the new album would be more rock-focussed than their last releases. What’s not to look forward to about that?

In short, this was GUN at their very best. They didn’t come by their reputation as being one of the best live rock bands around by accident, and never leave anything onstage. Once again Dante and the guys delivered in spades here. Awesome. End of.

Let it Shine
Word Up
Don’t Say it’s Over
Better Days
Freedom
Money to Burn
Something to believe in
Taking on the World
Hold your Head up
Money (Everybody Loves Her)
labour of Life
Inside Out
Steal Your Fire
Welcome to the Real World
Shame On You
(You Gotta) Fight for Your Right (To Party!) 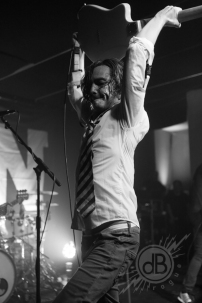