Def Leppard will celebrate the 30th anniversary of Hysteria by releasing a remastered version of their iconic album on 4 August. There are various special editions in assorted formats bringing together b-sides, live tracks, videos, books and plenty other associated goodies to keep any fan of the band happy.

Unless you’ve lived under a rock for the last thirty years you’ll be well aware that Hysteria is one of the best-selling and most influential rock albums in history. Selling in excess of 30 million copies worldwide and spawning 7 hit singles, this hard rock/pop hybrid was powered by stadium filling drums, huge riffs and Joe Elliott’s soaring vocals. It was rock’s answer to Michael Jackson’s Thriller.

So here we are, thirty years down the line. How does this remastered version of the album sound today?

I’ve always felt that Hysteria was an album of it’s time and is a collection of songs which I couldn’t ever imagine having been written at any other time. Yet it somehow manages to retain a timeless quality. Granted, I’ve owned a copy of Hysteria since I was a teenager, so I have an obvious familiarity with the album. However there are many other records from that era which I once considered to be great, but now sound dated, cliche-ridden and a bit rubbish. Hysteria still sounds like an eighties rock album, but it’s not weighed down by that baggage. The years have been very kind.

Ask any artist or band today what they’d do to write just ONE iconic song in their entire career, they’d gladly offer to sell off parts of their anatomy. Or a relative. Hysteria? Well, you can take your pick of iconic songs: Pour Some Sugar On Me, Animal, Love Bites, Hysteria, Rocket, Armageddon It. The term ‘all killer, no filler’ could’ve been invented for this album. Sure, for long-time fans of the band, listening to Hysteria now is the music equivalent of putting on an old pair of favourite shoes. But that the album still sounds so good today is testament to the towering achievement of the band and their producer all those years ago. 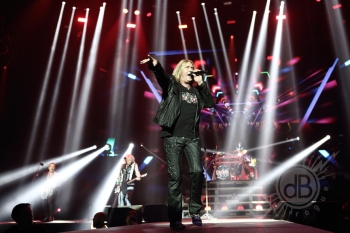 Given that most people will know Hysteria inside out, special editions are great opportunities for fans to get their hands on rarities such as b-sides, remixes and live recordings. And this is no exception. There is plenty of great stuff to choose from, but for me the highlight has to be the audio from In The Round In Your Face. Recorded at the McNichols Sports Arena in Denver Colorado during the band’s Hysteria tour in 1988, this concert was previously only ever available on video. Now for the first time it’s available on CD, and if ever a live recording captured a band at the peak of their powers, then its this one. In a set containing songs from all four of their albums up until that point, Def Leppard knocked it clean out the park. And then some. Live rock performances just don’t get much better than this. Obviously Steve Clark was still in the lineup at this time, so these recordings are a rare opportunity to hear him perform live.

It goes without saying that Hysteria (2017) is fantastic. Over the years it’s been argued by some that Hysteria was overproduced and that Pyromania was the better rock album. Both points of view may be true. However Hysteria pushed the boundaries of what was technically possible at the time and in doing so reached out to a much wider audience than would otherwise have been possible. This special edition is an absolute must have for any fan of the band. There are numerous options available and the gorgeous Super Deluxe Edition won’t be exactly cheap, but you do get what you pay for. I just have to hide the credit card bill when it comes in…