GUN Get Their Swagger Back 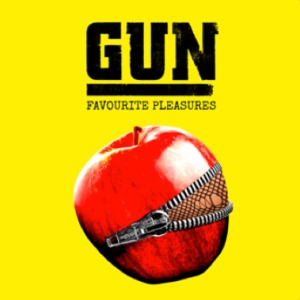 GUN release their latest album Favourite Pleasures on September 15. And having had the opportunity to listen to the album quite a few times, I might as well start this review by stating the bleedin’ obvious: You’re gonna love it!

Given that GUN have built a phenomenal reputation for their live performances over the years, I always listen to their new albums with that in mind. How much of each new album would transition well into their live shows? In the case of Favourite Pleasures you can just about take your pick from any of its 10 tracks.

It’s one of those albums you can tell that from a creativity point of view, GUN are in a great place. It’s as if the band were given license to bring all their favourite music influences together and just let it rip. Obviously that’s a gross simplification of the work that goes into making any record, but the first time I listened to the album, I’d get into a track and thought ‘ooh, that sounds a bit like…’

From the Foo Fighter-esque opening track She Knows and the glam rockin’ vibe of second track Here’s Where I Am, you get the sense that Favourite Pleasures is gonna be a different proposition from GUN’s previous album Frantic. There is an attitude and a guitar-driven ethos about Favourite Pleasures which their most recent albums simply didn’t have. And sometimes that attitude is conveyed like a none too subtle punch in the face, like the appropriately titled Go To Hell.  In fact, you really have to turn the clock back to the band’s 90’s heyday to find songs with that same kind of dig.

That’s not to say that the album is a one trick pony, since there are a couple of tracks which stand out stylistically. Silent Lovers is a light and catchy piece of 70’s pop-rock. And the guitar/piano/vocal arrangements of the chorus have a slight scent of the Beatles about them – tell me that’s a bad thing! Final track, The Boy Who Fooled The World comes right out of left field however. A piano-driven ballad, the song is Dante’s personal recollection of being a young boy recording music from the radio on his tape recorder, then growing up to have a career in music. It’s a great song and rounds out the album with a little touch of class.

Highlight of the album for me is Black Heart. It’s a sleazy, bluesy, swaggering, epic of a song. And I tell you what, I can’t wait to hear it live because it’s got the potential to become a cornerstone of GUN’s live sets for years to come.

Favourite Pleasures isn’t so much a return to form for GUN, it’s more of a return to the kind of guitar-driven rock music that made us all fall in love with the band in the first place. Yep, GUN have got their swagger back!