Joe Elliott’s Down ‘N’ Outz have announced the release of a new live album The Further Live Adventures Of… on December 1. The album was recorded at Sheffield Corporation in December 2014 and will be available 2CD/DVD, Blu-ray, vinyl and digital. On the same day the band will also reissue their previous records My Re-Generation and The Further Adventures Of … on CD, LP and digital.

The Down ‘N’ Outz is a project founded and fronted by Def Leppard’s legendary vocalist Joe Elliott, and pays tribute to rock legends Mott The Hoople. He’s joined by The Quireboys’ guitarists Paul Guerin and Guy Griffin, the band’s pianist Keith Weir, drummer Phil Martini of Wayward Sons and Vixen’s bassist Share Ross. The band originally came together on what was supposed to be a temporary basis to support Mott The Hoople during a series of reunion shows back in 2009. 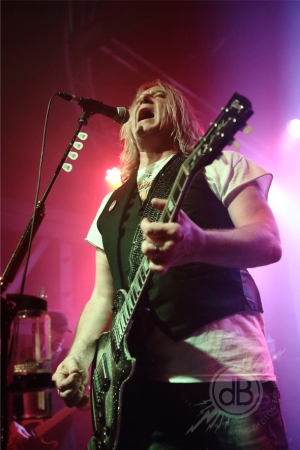 “When Mott The Hoople announced they were reforming for a week’s worth of shows at the Hammersmith Odeon, I was asked that I participate in some capacity. They’ve always been my favourite band and it’s nice to see the rest of the rock world finally catch up and give them their due. But, what was I to do? It was suggested to me that the Quireboys would be up for offering their services. This was perfect! A fan since their first album, I loved the idea of working with a band as enthusiastic to do this as I was. I decided that the thing to do was play some songs that like-minded people thought they would never hear live again, if ever. Songs by spin offs of Mott the Hoople – songs by Mott, Ian Hunter and British Lions. Songs that are close to my heart Songs that I’ve played every week for the best part of 35 years on record, cassette, CD, iPod and now live.” – Joe Elliott

The band obviously enjoyed themselves during Mott’s reunion shows, because two studio albums and many live dates later, the band are powering on with their celebration of all things Mott. We were lucky enough to catch Down ‘N’ Outz during their last tour and it was an absolutely fantastic night of old school rock music. How could it be anything else given their stellar lineup? But perhaps the most interesting aspect of their performance of all was that it gave an insight into the kind of music that makes a rock star like Joe Elliott tick.

No news as to whether Down ‘N’ Outz will be hitting the road again any time soon, but this album will surely keep us going in the meantime!

The Further Live Adventures Of… is available to pre-order HERE.