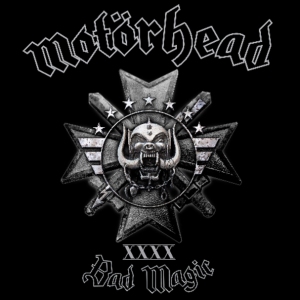 Motorhead have just announced the release date for their much anticipated 22nd studio album ‘Bad Magic’ for 28 August.

Bad Magic is the first album in Motorhead’s Kilmister/Campbell/Dee era which has been written and recorded by the band together in the studio. And we are promised this ‘live’ creative approach has resulted in an album which is their best work in two decades. As we all know, Lemmy hasn’t had his health problems to seek in recent times and perhaps sensing that he’s flesh and blood after all, has laid down his most wide-ranging and unique personal performances to date.

But there’s no need to fear that Lemmy’s taking his foot off the gas, since Bad Magic has plenty of the thunderous attitude, fierce rhythms and relentless Motorheadbanging greatness we’ve come to expect from him and the guys.

There are a couple of other highlights I should tell you about.  Firstly, Brian May from Queen guests on Motorstomper in customary style with a brilliant guitar solo. And then there’s the last track of the album… Sympathy For The Devil. Yep, Motorhead has gone and recorded their take on the Rolling Stones classic. Now THAT has got to be worth the price of the album alone!

Motorhead will be touring the USA and mainland Europe throughout the second half of 2015 and there are more dates yet to be announced. We’ll let you know as and when UK dates are announced.

← Glamis Prom 18 July
Callaghan – An Artist You Need To Know →