If you browse through our ARTIST A-Z page and consider the type of bands decibelROGUE has reviewed over the last couple of years or so, you’ll probably come to the conclusion that it covers a pretty extensive range of genres. However, to me it represents one BIG comfort zone. And that’s because each artist on that list conforms to the same conventions and structures when it comes to songwriting. Their songs all have verses, choruses, solos, etc in roughly the same places, and they tend to finish each song at the same rhythm and in the same style as they started.

Which brings me neatly to SikTh. As you’ll probably know, the Watford-based progressive metallers defy such conventions, as their songs are full of diversions, differing styles and changes of tempo. So when the band announced that they’d be heading to Glasgow on their current UK tour, I saw an opportunity to step out of my musical comfort zone and dive head-first into the world of progressive metal for the first time. Fast forward to Sunday with my accreditation duly agreed, I headed to G2 Glasgow to see if I’d sink or swim…

Before I get to our headliners, a quick shout out to Sunday’s support bands. First onstage were London-based trio Press to MECO. Now these guys are a pretty interesting proposition. Quite apart from all three band members sharing lead vocals and harmonies, their music seems to take inspiration from pretty much everything from hardcore and metal to pop. Their set here was full of brilliant harmonies, complex guitar solos and ground-shaking, aggressive riffing. 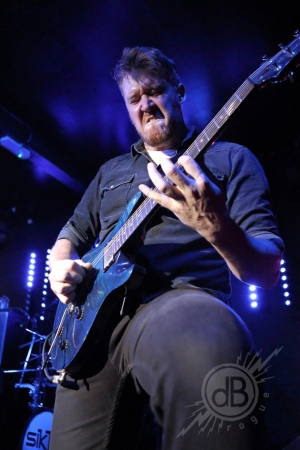 The intensity was then ratcheted up a few notches when post-hardcore Devil Sold His Soul took to the stage. As subtle as a punch in the face, DSHS hit the Glasgow crowd like a hurricane. I can’t ever remember seeing a frontman maintaining such a high level of vocal aggression from first to last as DSHS’s Paul Green. At times it was like wave after wave of impenetrable screaming, but it underpinned a properly brutal performance by the band.

Now, although I’m a complete newbie to Sikth’s music, I didn’t rock up to Sunday’s gig without first buying and listening to their latest album The Future in Whose Eyes? Nevertheless, this didn’t change the fact that I’d be hearing the vast majority of the songs in their set for the first time. So with my mind well and truly open, I was ready and raring to rock as the band took to the stage and launched into first song Philistine Philosophies.

The first thing which stood out during their set was the obvious connection between the members of the band and their fans. During that first song there was much reaching out and shaking of hands, pointing and acknowledgements to familiar faces in the crowd. There was a definite sense of community about the place. You could instinctively tell that everyone in the room was on the same page.

The next thing which stood out was just how damned impressive these guys are in a live environment. As they drove on into The Aura and Golden Cufflinks (my two favourite tracks from The Future in Whose Eyes?) SikTh underlined the fact that they are not only a great studio band but also an awesome live one.

The level of their musicianship is just insane! When I listened to the album for the first time I was completely blown away by guitarists Graham Pinney and Dan Weller. But recording something in the studio is one thing – replicating it live, night after night, is something else entirely. Yet somehow they manage it. The intricate nature of their guitar arrangements, and the fact that the songs themselves ain’t exactly short, meant that Pin and Weller had to perform at 100%, 100% of the time. So there was no hiding place for them. I’ve seen many impressive guitar performances in my time and am pushed to think of anything coming close to this.

The same can be said for drummer Dan Foord and bassist James Leach, who drove this juggernaut of a performance through a landscape of differing tempos and styles so tightly you’d think there was a direct telepathic link between them.

Up front, Joe Rosser and Mikee Goodman ran the show. Goodman in particular was in brilliant wild-eyed, wild-haired, borderline insane form and had the audience in the palm of his hand from beginning to end.

As a newbie, this was one of those nights when at times the music just became overwhelming. There was so much going on, all of the time. And just when I started to get my head around things, BOOM the band headed off in yet another direction, knocking me off-balance once more. But when was the last time any band managed to do that to me? NEVER. As you can imagine then, picking out a highlight from all of this is nigh-on impossible for me. However, I loved the batshit crazy double kick drum ferocity of Pussyfoot.

So I guess the best way for me to judge this gig is to look at it in terms of what happens next. Will I consign The Future in Whose Eyes? to the depths of my iTunes archive and crawl back into that music comfort zone, or will I keep listening (and learning)? Well, it’s gonna be the latter. SikTh were massively impressive here, and really opened my eyes, ears and mind to progressive metal.

I’m off to buy Death of a Dead Day. 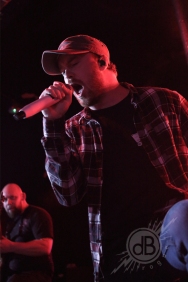 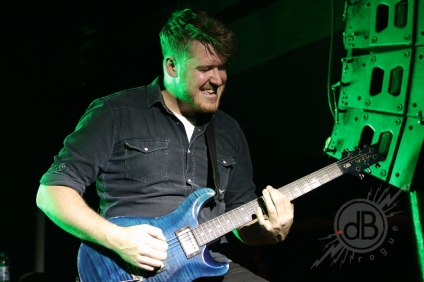