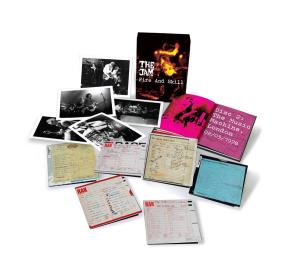 It’s 40 years since classic The Jam line-up first started touring. The band had a phenomenal impact on pop music and wider youth culture. In their short career, they influenced a generation with their music, style, politics and inspiration.

With Somerset House’s current exhibition and Universal Music’s recent CD ‘About The Young Idea’ which both trace the band’s story in hits and images – Universal/Polydor now announce a live box set that follows the journey through incendiary concert recordings.

Named after the legend painted on Paul Weller’s amp, ‘Fire & Skill’ is a superb six disc box set – featuring six previously unreleased concerts, one from each year of their major-label career….

1. Starting with an early gig at London’s famous 100 Club from 1977, the show featured took place 10 months after they first played the venue in November 1976, and was recorded for broadcast on American radio ahead of the trio’s inaugural visit to US in October 1977 for a six-date tour.

2. A Music Machine show from 1978, featuring most of the 2nd album – ‘This Is The Modern World’. This was The Jam’s sixth live show of the year and one of four low-key shows in the capital to fanfare their new ‘News Of The World’ single under the banner ‘The London Blitz’.

3. Reading University – Feb 1979. Playing material from their breakthrough album ‘All Mod Cons’, this was The Jam’s first live appearance of 1979, and found the band in a radically different place to their showcase at the Music Machine 12 months before. In that time, their third album, ‘All Mod Cons’, had been released to critical acclaim, and their status as one of the New Wave’s most musically substantial and exciting bands had been secured. And Weller was still only 20 years old…

4. Newcastle City Hall – October 1980, previewing songs from forthcoming album ‘Sound Affects’. In the time between the show at Reading University (on Disc 3) and this appearance at Newcastle City Hall 20 months later, there had been more extraordinary developments in the group’s world. ‘Setting Sons’, their fourth album, had given them a Top 3 hit with ‘The Eton Rifles’, which was followed in February 1980 with the stirring Number 1 single, ‘Going Underground’. After three years on Polydor, The Jam had finally become the biggest group in the UK.

6. One of the band’s final ever gigs at Wembley Arena – December 1982. Late in 1982 The Jam announced they were splitting up – there would, though, be a final chance for fans to experience The Jam’s astonishing live shows, with a 14-date ‘farewell’ tour announced. The centrepiece was a five-night stand at Wembley Arena, the 10,000-capacity shed next to the London football stadium (the recording here is from the second date), the biggest live venue in the capital.

* Individual gatefold wallets for the discs, designed as facsimiles of the original tape boxes.

* Featuring stunning live versions of all the band’s classic hits and favourites of which only 11 tracks previously released.

Want one? Course you do! Pre-order HERE