The Quireboys Live at the O2 ABC Glasgow 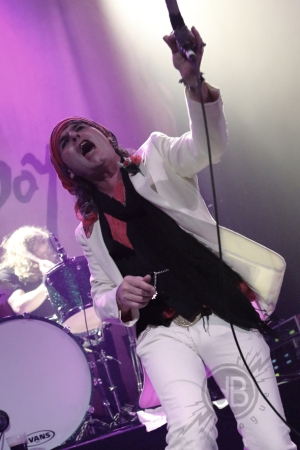 We at decibelROGUE never need to be asked twice if we’d like to go out and join in the annual St Partick Day celebrations. It’d be downright rude not to after all! And even though this years’ festivities fell on a school night, there was no way we were staying at home because there was some properly good live music to enjoy. Right at the top of our to-do list was the inaugural Hard Rock Hell AOR Tour which rocked up to Glasgow’s O2 ABC with The Quireboys as headliners. St Paddy’s night with The Quireboys – what’s not to love about that?

Over the last ten years, Hard Rock Hell has become the undisputed European leader in residential rock festivals and today has genre-related festivals such as HRH Prog, HRH Blues, Hammerfest, HRH Road Trip, HRH Sleaze, HRH Doom, HRH Stoner and HRH Thrash, as well as HRH itself, migrating globally.  The HRH AOR Tour hit the road for the first time this year and brought a really strong lineup of bands to Glasgow to give us a flavour of what this brilliant rock community is all about. Joining The Quireboys on Thursday night were Swedish sleaze rock outfit Hardcore Superstar, Bonafide who are another bunch of hard rocking’ dudes from Sweden, plus southern-rockers Thirteen Stars who hail from the West coast of errr… Cumbria.

We always try to get to gigs as early as possible to catch as much of every show as we can, especially when there are bands in the lineup we have never seen before. However, since this show started pretty early in the evening, blasted day job commitments meant we arrived too late to see any of Thirteen Stars’ set. I’d only ever seen recordings of their performances on YouTube and was gutted to have missed out on seeing them in the flesh here. However, that disappointment was tempered by the fact that we arrived just in time for Bonafide to take to the stage – because these guys seriously rock!

Bonafide are quite simply, purveyors of no-nonsense hard rock. And there’s more than a hint of early AC/DC about much of their music – which is a very good thing indeed. Listening to songs like ‘Dirt Bound’, ‘Hard Livin’ Man’ and ‘Fill Your Head With Rock’, I couldn’t help but wonder whether the two bands were somehow separated at birth. The best compliment I can pay Bonafide is that Brian Johnson and the guys couldn’t have rocked the joint any harder than they did. And I bought two of their albums on the strength of their performance here. Brilliant! 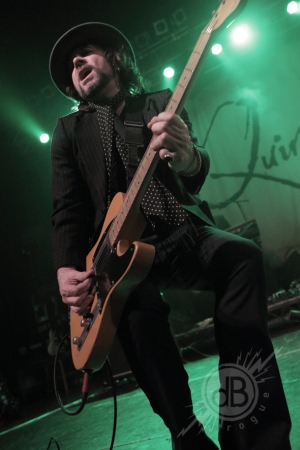 Next up was Hardcore Superstar who cranked up the intensity a notch or four with a brilliant set. Jocke Berg is one of those properly good rock frontmen who you just can’t keep your eyes off. From opening song ‘Sadistic Girls’ right through the rest of the set, he relentlessly paced the stage, working the audience into a fist-pumping frenzy. Highlight for me was ‘Last Call For Alcohol’ which was brim full of attitude, huge riffs and aggression. And it’s a song about drink. We like to drink! Speaking of which, we particularly liked the way drummer Adde Andreasson got his tech to fill in on his kit while he handed drinks out to the crowd. Cheers!

And so to our headliners. Although we covered The Quireboys playing an acoustic gig in Edinburgh last year and had previously seen guitarists Paul Guerin and Guy Griffin play in Joe Elliott’s Down ‘N’ Outz a while back, this was the first time we’d seen the whole band perform a full electric gig. After being led onstage by a piper, Spike kicked things off with his customary welcome before the band launched into ‘Troublemaker’.

For the next hour or so, Spike led the audience through a blistering set of Quireboys classics. Yet for all the brilliance of songs like ‘Hey You’, ‘7 O’Clock’ and ‘Sweet Mary Ann’, the highlight of the set for me was a track from their latest album, St Cecilia and the Gypsy Soul. The acoustic version of ‘Gracie B’ which opens the album is an absolute belter, but the song just sounded bigger, badder and (to me at least) better, performed live with electric guitars.

Obviously Spike drew most attention as he darted about the stage spinning and throwing his mic stand around. However, as good a vocalist and as charismatic a frontman as Spike clearly is, he can’t do absolutely everything himself. So it’s a good job that he’s joined by five SERIOUSLY good musicians. Guy Griffin and Paul Guerin were absolutely awesome as they swapped lead guitar duties. If there’s a better pairing of guitarists in any band today, anywhere, I’ve yet to see them. Keith Weir added a layer of depth and class on keys, while down in the band’s engine room, Nick Mailing and Dave McCluskey (on bass and drums respectively), drove things along relentlessly.

Since this was the first time I’d seen the full band play an electric gig, I can’t tell you how this show compared to others they’ve done in the past. What I can say is that it was as good a gig as I’ve seen in recent times. The good news is that The Quireboys tour relentlessly, so with a bit of luck it won’t be too long before they’re back in town.

So, hats off to the guys at Hard Rock Hell for putting together such a great lineup and bringing it to our neck of the woods. Hopefully we can do it all again next year! 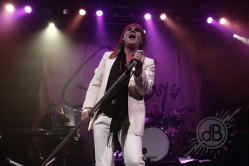 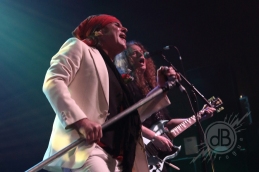 One thought on “The Quireboys Live at the O2 ABC Glasgow”