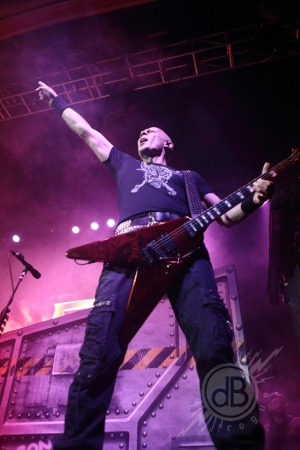 Shock & Awe. A term usually used to describe a hugely powerful military action. But in the context of Sabaton’s performance in Glasgow last week, also entirely appropriate in a music context. After all, how many bands have a bleedin’ tank onstage? Can’t think of any others. Anyhow, I’ll come back to the tank later…

I always – for one reason or another – feel a certain amount of sympathy for support bands. Very often venues are pretty empty when the first support band takes to the stage, and the bands themselves know fine well that the majority of people that have turned up early generally just want to make sure they’re down near the front for the headliners. This time around however, the O2 Academy was already pretty full when first support band Twighlight Force came onstage. Such was the size of Sabaton’s setup however, the band had to be shoehorned into a tiny slice of the front left of the stage. This was a bit of a pity because the scale of the band’s symphonic power metal songs was at complete odds to the tiny space they had to perform in. Great start to the night’s music though.

Next up were German metal legends Accept. 15 year hiatus notwithstanding, the band are now in their fifth decade of performing and are showing no sign of slowing down. Obviously their lineup has changed a fair bit over the years, but original members Wolf Hoffmann and Peter Baltes are still there. Although I’ve not listened to much of their recent material, that’s gonna change because this power-packed, balls-to-the-wall performance was properly eye-opening. Great songs with huge riffs, thunderous drums and blistering guitar solos. It was all here. Awesome! 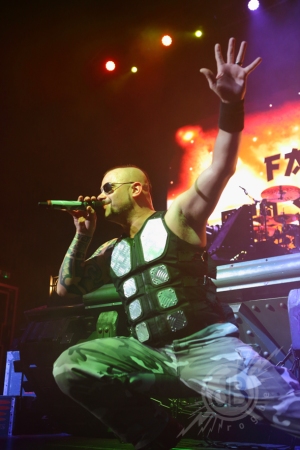 As you may know, there’s a very militaristic flavour to Sabaton‘s music and their live shows. War and historic battles are constant themes of their music, with bloody last stands being the focus of their latest album The Last Stand.

Before I get to their performance though, I really need to tell you about Sabaton’s stage set. The military theme runs deep with these guys. Their micstands are based on machineguns, their stagehands dressed as soldiers. And their drum riser? Well lets just say you have drum risers, and you have large drum risers, but then you have Sabaton’s drum riser: A TANK! A bloody great tank is what Hannes Van Dahl sets his drumkit on. Ok, it’s not a real tank, but it certainly adds presence and visual drama to their show.

And the grand nature of the stage set was entirely in keeping with the music which blasted from it. Right from opening song Ghost Division Sabaton were absolutely awesome. Listening to their recorded material is one thing. I can tell you that experiencing them live is something else altogether.

Take Shiroyama for example. The recorded version of the song is one of the standout tracks on The Last Stand and is, in itself brilliant. However, the song is a different beast when you hear it performed live. It just seems have much greater scale and intensity, which hits you like a none too subtle punch in the face. Epic barely does it justice. Likewise, Sparta and Winged Hussars which had the old venue shaking to it’s foundations. I can’t remember hearing many other bands who can create such a BIG, all encompassing sound like these guys.

The thing about Sabaton is that they are more than just a one trick pony. They can dial back the heavy artillery a bit as well, as they did brilliantly with an acoustic version of Final Solution. Pretty soon though normal service was resumed and the thunder well and truly returned with Resist and Bite.

One of the many things which struck me about Wednesday’s show was that despite all of the songs about war, fighting and heroic last stands, the vibe within the audience was overwhelmingly positive and upbeat. I guess this was due in no small part to charismatic frontman Joakim Brodén, who worked the packed audience into a fist pumping, crowd surfing frenzy. Everyone was there to have a good time and everyone seemed to be on the same page.

Which brings me nicely to the highlight of the gig for me. This time, my highlight has nothing to do with the band’s performance, but everything to do with the little details which make good bands great. There was a young kid at the front of the audience near where we were hanging out and he was – by a long way – the youngest person in the venue. He was wearing a homemade costume complete with body armour to made him look like frontman Joakim Brodén, and was really throwing himself into the whole occasion as only kids do. He caught the eye of bassist Pär Sundström who went to the back of the stage to get the young fella a souvenir drumstick as a memento. Small gesture I know, but it speaks volumes for the band.

As rock shows go this was right out of the top drawer. As I’ve said more than once before, I love bands who are fearless enough to go off in unusual creative directions. Sabaton certainly fall into that category. Best of all there’s no style over substance in what Sabaton do. They rock with the best of them. 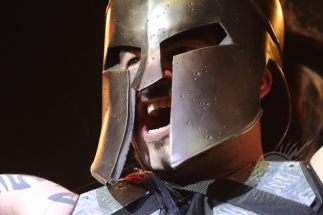 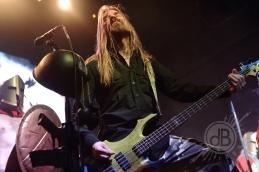 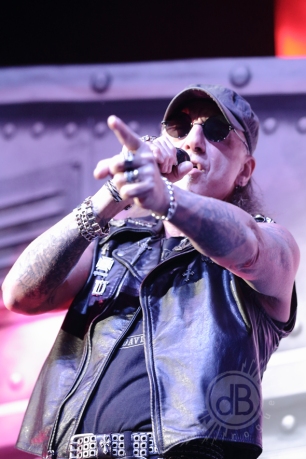 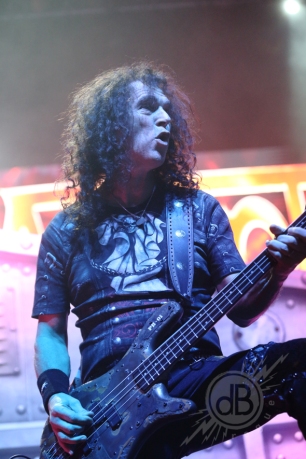