Black Star Riders and GUN hit Glasgow last Wednesday night for the first of two co-headline shows at the O2 ABC. So if ever anyone needed an excuse to head out on a school night for some no-nonsense live rock, then these gigs were surely it. With BSR’s origins lying in Thin Lizzy who formed back in 1969, and GUN who originally came together in the late eighties, these are bands who’s reputations have been earned over decades-worth of live performances. And boy, did it show!

Before we get to that however, a quick word about Wednesday’s support, the Backyard Babies. They’re another band who have been around since the late eighties, but I’ll tell you what, you’d never know it. There was a rawness, a grittiness and an attitude about their performance which made you think that you were watching a band in the early stages of their career. Their songs were classically short sharp shocks of punk-infused rock energy, and their brilliant half our set flew by in what seemed like a blink of an eye. During their set there was a reminder that although 2016 is no more, the music world continues to lose more than it’s fair share of good people, as the band paid tribute to former Hellacopters guitarist Robert ‘Strangen’ Dahlqvist who sadly passed away in February. Overall though, a brilliant performance to kick off the evening.

GUN‘s reputation as one of the best live rock bands Britain has ever produced has been well deserved. We’ve caught them in action a few times since they reformed back in 2012 and they’ve never been anything less than awesome. This time around there were a couple of things which added a little bit of spice to their show. Firstly, this would be the first time that GUN’s hometown audience would get to see new guitarist Tommy Gentry perform with the band. And secondly, with a new album due later in the year, the band promised to perform some new material.

GUN pretty much picked up where they left off the last time we saw them perform. And as they tore through the opening songs of their set it became obvious that the new found intensity of the shows from their previous tour (which had Alex Dickson in the lineup) was still there. So, as much as it was a real disappointment that Dickson’s return was so short lived, on this evidence Gentry seems to be a great addition to the band. Having been fortunate enough to have seen GUN perform on a couple of occasions in the last year, Wednesday’s setlist had a certain familiarity about it. But if you were seeing them live for the first time, or the first time in a while, you would have been pretty pleased with what you saw. There was a perfect blend of recent material and classic era hits, with signature song Word Up coming early doors. There was much bouncing to that one!

Since announcing that they were about to start work on a new, more rock-focussed album, GUN’s fans have been hoping to get a sneak peak of this new material. So as frontman Dante Gizzi introduced new song She Knows, you could really feel the anticipation of the audience heighten. Based on hearing the song played once, She Knows is indeed a much more rock-focussed song than any of the band’s recently released material, but it’s also unlike their classic era songs. I hate trying to allocate genres to things, but if pushed I’d say it’s in alternative rock territory. There’s a Foo Fighter’s kinda vibe going on in the guitar arrangement, which for me is no bad thing whatsoever. It’s high energy, has a great hook and includes a blistering guitar solo from new boy Tommy Gentry. She Knows is an exciting departure for the band and augers well for the new album due in August/September.

After rounding out their set with a barnstorming cover of the Beastie Boys’ classic (You Gotta) Fight for Your Right (To Party!), the Glasgow audience had just enough time to catch their breath before Black Star Riders wheeled out the heavy artillery.

Although decibelROGUE has pointed it’s cameras in the direction of Black Star Riders before, this was the first time that we had see them perform a full headline show. And the thought that we were going to watch what was – in all but name – Thin Lizzy, gave the occasion an additional shot of excitement.

The opening salvo of their set was the title track of the band’s new album Heavy Fire. Now, I have to admit that when I first heard the recorded version of the song I wasn’t particularly taken with it. But it’s a grower, and it’s one of those songs which for some strange reason just sounds bigger, better and meaner when it’s played live. And it brilliantly set the tone for the rest of the show.

When you listen to BSR’s music for the first time, it doesn’t take long for you to realise that although the band is a deliberately distinct entity, Thin Lizzy heritage runs deep within the DNA of their songs. Here, as they exploded from one properly powerful riff-laden rocker of a song into the next, it was abundantly clear that you were watching an evolution of what Thin Lizzy had been in their heyday. This was due in no small part to the performances of two key areas of the band; frontman Ricky Warwick and the awesome twin lead guitar pairing of Scott Gorham and Damon Johnson.

Ricky Warwick has got to be one of the most complete rock frontmen out there today. Some guys seem to try that little bit too hard to be rockstar cool. But they’re probably doing that to disguise the fact that they can’t sing very well, can’t play an instrument or write particularly good songs. Warwick on the other hand is exactly the opposite. Not only does he write great songs, he’s a great vocalist and plays guitar better than most. From the moment he swaggered onstage, he exuded that rockstar vibe so effortlessly. And he sounds just similar enough to the legendary Phil Lynott without sounding like he’s trying to copy him. As a focal point for a band like BSR, you just couldn’t do any better.

We’ve been lucky enough to see some fantastic guitarists and guitar pairings perform at close quarters since decibelROGUE rolled into action 18 months ago. But the pairing of (sole remaining original Thin Lizzy member) Scott Gorham and Damon Johnson easily tops the lot. The way they work together as tightly as they do is so impressive you could be forgiven for thinking there is a genuine telepathic connection between them. That signature twin lead guitar sound which helped define Thin Lizzy’s heyday continues to bring that extra dimension to BSR’s music today. Power, precision and some seriously impressive solo’s – it was all here.

So how do the songs from Heavy Fire sit with those from the bands first two albums? If this show was anything to go by, the new material sits shoulder to shoulder with the best of them. Heavy Fire had a power and dynamism which you really need to hear for yourself in a live setting. Testify or Say Goodbye rocked like a runaway train and Who Rides the Tiger had a brilliant visceral energy.

My music highlight of the whole night though, was Jailbreak. And given that it was the only song of the evening who’s intro was greeted by an almighty roar by the audience, I’m guessing that it I wasn’t the only one who felt that way. Yes, I know this tour is about BSR and there new material, but since this is the closest we’ll probably get to seeing Thin Lizzy perform any time soon, I don’t think it’s unreasonable to revel in the performance of such an iconic song. It just doesn’t get old. It just doesn’t get boring. It just doesn’t get any better than this. I just wish I could’ve been around to see Thin Lizzy perform it in their heyday.

This was one of the best nights of rock music we’ve been fortunate to cover in a long time, with all three bands at the top of their game. In saying that though, I never thought I’d see the day when GUN were outgunned on their home patch. But BSR were simply on another level. Thin Lizzy’s huge legacy seems to inspire and drive, not stifle their creativity. They manage to strike the perfect balance in honouring what has gone before but still sounding fresh, powerful and contemporary. Simply bloody awesome. End of. 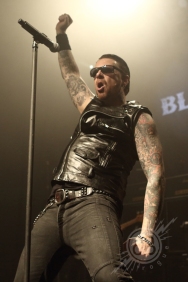 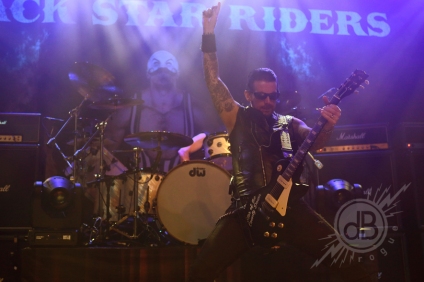 Let it Shine
Word Up
Don’t Say it’s Over
Better Days
Hold your Head up
Money (Everybody Loves Her)
She Knows
Labour of Life
Inside Out
Steal Your Fire
Shame On You
(You Gotta) Fight for Your Right (To Party!) 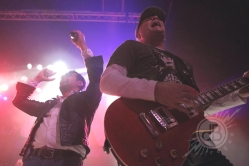 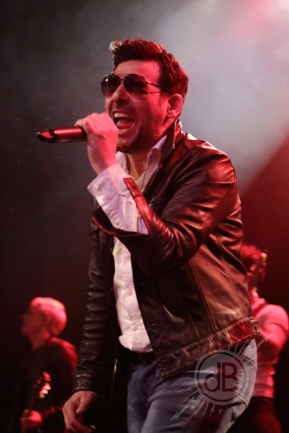